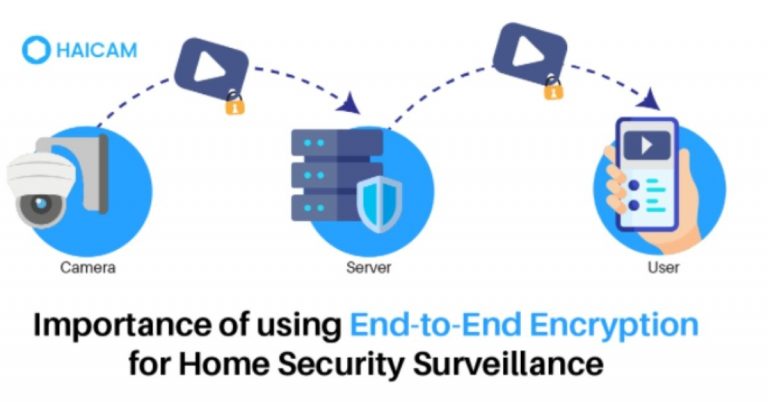 Security in the home is a concern for every homeowner. The most common worry is burglary and home invasions. There are many ways to keep your house safe and secure, but one of the most effective is installing an all-in-one security system with integrated home surveillance cameras.

But what is end-to-end encryption? And how does it enhance your home security system? Encryption is a method of encoding a message or file so that only authorized parties can read it.

Here are five benefits of using end-to-end encryption on your home security system.

While there is more than one type of encryption, end-to-end encryption has become the most popular method of digital security. It’s used by organizations and businesses across various industries worldwide because it offers better protection against cyber-attacks.

At the same time, data can be encrypted in many different ways with varying degrees of success–such as public-key encryption (PKE) and symmetric key encryption (SCK). The most widely used form of end-to-end encryption is public-key cryptography, which is rare but very effective.

How does End-to-End Encryption work?

End-to-end encryption technology works by securely encrypting all data between the sender and receiver using a unique key. Only the intended recipient can decrypt the data, ensuring privacy and security.

While encryption keys can be used for many purposes, you can opt for Haicam end-to-end encryption (E2EE) hub/NVR software. Also, with its built-in features such as human and animal detection, monitoring vehicle movement in real-time, and providing remote access via mobile and web browsers.

How do you use End-to-End Encryption?

When sending messages in end-to-end encrypted messaging technology, the sender encrypts the message before sending it.

Users can trust the message without suspicion because no third party can read that data–not even imposter hackers or marketers who may want to trick you into something unsavoury.

When you receive encrypted text messages or emails, the receiver encrypts your data using a private key before sending it to you.

How can you use end-to-end encryption for business purposes?

There is no definitive answer to this question, as end-to-end encryption varies based on specific needs.

Ensuring that all communications between your company and its customers are encrypted, including email and messaging.

After all, communications (both inbound and outbound) are effectively end-to-end encrypted. It’s essential to make sure your businesses exchange packets with a private key that is only accessible by the recipient on their encryption side vs. sending any kind of data stored within plain text in an unencrypted format.

Home security surveillance is an essential aspect of homeownership. It’s crucial to keep an eye on your property, but it can be challenging to do so without being seen. End-to-end encryption can help you maintain a level of privacy when you’re watching your home from afar.